Microsoft is promising a fairly painless upgrade path to Windows 10, provided users have been keeping their existing versions up to date.

If you’re running Windows 7 Service Pack 1 or Windows 8.1 S14 (that’s the “Windows 8.1 Update” from last April), you’ll be able to get Windows 10 straight from the Control Panel’s Windows Update utility. In other words, you won’t have to mess around with installation disks, and all your files and programs will remain intact.

Your data won’t be erased if you’re running an older version of Windows 7, Windows 8, or Windows 8.1, but you’ll have to download an ISO and create an installation disk. It’s just a little more of a hassle. 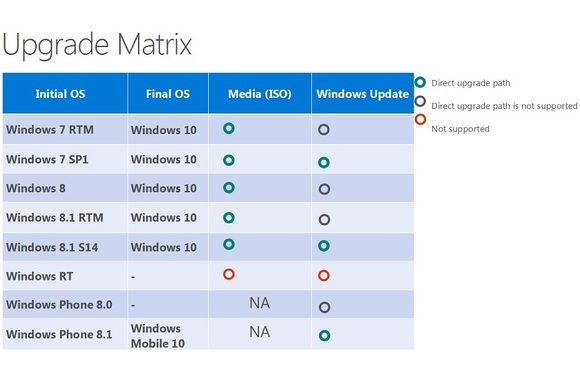 In either case, upgrading to Windows 10 will be free, as long as you make the jump in the first year after launch. Windows Vista and Windows XP users with compatible hardware can buy an upgrade to Windows 10, but this will require a clean install that erases all programs and files.

What about Windows Phone? Microsoft is apparently referring to this version as “Windows Mobile 10,” and says anyone running Windows Phone 8.1 will be eligible. The process will be similar to how smaller upgrades work, with the software being delivered over the air.

Unfortunately, Microsoft isn’t providing an upgrade path for users stuck on Windows Phone 8.0. Windows RT devices such as the non-Pro Surface and Surface 2 will also be left out, though they may get some Windows 10-like features as part of a separate update.

Microsoft revealed the upgrade paths during its WinHEC conference in Shenzhen, China. The company also announced that users of pirated Windows versions will be able to get a legit copy of Windows 10 at no charge .

Why this matters: Microsoft clearly wants to move lots of people onto the latest version of its operating system and introduce them to services such as Cortana, OneDrive, and the Windows Store. But even with the lure of free upgrades, users might not budge if the process is overly complicated and involves deleting data. This new information suggests that the upgrade should be simple enough for pretty much anyone who wants to take advantage.