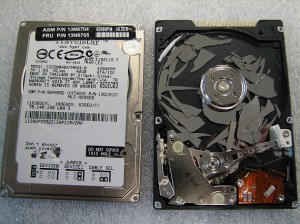 A little over a year into the life of my first ever laptop—a Powerbook G4, if you’re curious—the hard drive straight up died on me, seemingly for no reason. Enough stuff was backed up elsewhere that it wasn’t exactly a tragedy; the worst part was the fact that Apple made me pay to replace it. But the replacement hard drive outlasted that laptop, even surviving when a kicked cup of water burned out the logic board; I just took the hard drive out of the burnt-out body and popped it into another Powerbook body. It’s probably still working today, ready to be plugged in and play Tha Carter III as soon as you uncover it from my parent’s basement.

So if you ask me how long a hard disk lasts, I’d probably say either forever or exactly one month longer than your warranty—and until Backblaze released a study today, guesses like that were all we had. Now we know—not with 100 percent certainty, but more objectively than before—how long you can reasonably count on a hard drive.

Turns out, my experience with the Powerbook was pretty standard. According to Backblaze, about one in 20 hard drives fails in the first 18 months. The failure rate drops to just 1.4 percent after this initial break-in period, before jumping up to 11.8 percent annually after 3 years.