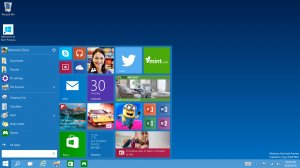 Instead of announcing the next version of its iconic operating system in front of a massive crowd of thousands, Microsoft chose an intimate venue with 50 or so reporters to launch the new Windows, which it’s calling Windows 10. The company looks at the new number (yes, it oddly skipped a number) as an indication of the direction it’s taking with the OS; Microsoft says it’ll be “the most comprehensive platform ever,” featuring a full range of products that’ll be placed under the Windows 10 umbrella as part of “one tailored experience.” That means it will support everything from the “Internet of Things” to enterprise servers, taking advantage of responsive design. Microsoft’s Joe Belfiore showed off an early beta version of the new Windows on stage, which looks very much like the leaked screenshots we saw not too long ago; Belfiore says that the company wanted to bring the familiarity of Windows 7 and combine it with the functionality of Windows 8.