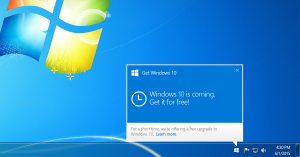 Windows 10 is here. You’ve seen some of its best new features, even heard what it’s like to use every day. But you might be wondering if you should upgrade. For some, it’s free, a great update, and a foregone conclusion. For others it’s better to wait, or think about other options.

You’d think upgrading would be a done deal, considering that Windows 10 is a free upgrade for so many people. But not so fast! We learned from past OS X upgrades that free doesn’t always mean “good,” and with something as serious as a Windows uplift, you should still think about whether that upgrade is right for you before you click “Begin Install.”

Remember: If You Qualify For a Free Upgrade, You Have a Whole Year to Redeem It

Many of you will (or already have) see that “Windows 10 has finished downloading: Install Now?” dialog on your desktop and instantly click. You might even be looking around the web right now for methods to make sure your turn in line comes sooner. That’s fine—but keep in mind that if your computer qualifies for a free upgrade, you have a full year to cash in on it.

That means that if you haven’t done the things you should before you install a new operating system—back up your data, update your drivers, and make sure your applications are compatible—there’s plenty of time. Plus, if you discover that any of your favorite apps, games, drivers, or hardware just won’t work in Windows 10, you can wait for the manufacturer or developer to address that before you get on the upgrade bandwagon. In short, don’t be in a hurry just because it’s free, or just because the install package is sitting on your computer, right there, waiting for you to double-click it.

We haven’t heard of anything that flat-out doesn’t work in Windows 10, but that doesn’t mean there isn’t something. Even if one obscure tool you use hasn’t updated, it could destroy your workflow. Do your due diligence and make sure you’re ready. Plus, if you have reason to wait, you just don’t like being first in line, or would prefer to let others shake out the bugs, Microsoft gave you that full year on purpose. Take as much—or as little—time as you need.

With that out of the way, there are some people who, once you’ve prepped your PC, don’t need to hesitate if you don’t want to. Tweakers, bleeding-edge enthusiasts, people who have been running the beta or the tech preview: You can all upgrade right away. For the rest of us, here’s a general list of people who should definitely get Windows 10:

Let’s just get it out in the open: Windows 10 is a worthwhile upgrade for most users and most PCs that can support it. We’ve been testing it here for months, both in technical preview and in beta. Like any new OS, it’ll take a little getting used to, and some things you may be familiar with have moved around. Stability-wise, it’s solid. Functionality-wise, there are definitely its share of quirks and inconsistencies, and some things we miss, but nothing so serious you should avoid it entirely.

Like we mentioned earlier, if you qualify for a free upgrade, you have a year to watch as people get hands-on, long-term experience with Windows 10 before you decide to join them. If you wait until after July 29, 2016, you’re stuck paying retail price. There are some people who’ll have to pay retail price anyway (I’m looking at you, Vista and XP users.) Either way, many of you will be better off waiting to see how things shake out.

If you’ve gotten anything from the list above, it’s that there’s no rush to upgrade. Wait and see how things shake out, and for a patch or two while Microsoft addresses the bugs and quirks people are uncovering. For example, Microsoft removed DVD playback from Windows 10. That’s not really a problem, and there’s an update coming that’ll bring it back. Maybe you like Windows Media Player and want to wait for that update.

If you’re skeptical, wait and see how other people’s experiences go. Try it yourself on someone else’s computer, or head to a Microsoft store or electronics store to try it yourself. For those people with older computers, ineligible for the free upgrade, you have all the time in the world, since you’ll have to pay for Windows 10 either way. Don’t get us wrong, we think that if you fall into one of the points above, you’ll eventually want to upgrade, just maybe not right away.

The Bottom Line: A Solid Upgrade for Almost Everyone

At the end of the day, Windows 10 is a solid upgrade. We’ve tested it, we think it’s an improvement over Windows 8.1 and Windows 7. The upgrade is easy. If you’re running Windows 8 it’s near-seamless, though Windows 7 users should be ready for a longer, albeit still simple, experience. There’s nothing about it that should grind your work to a halt, but there might be some bugs and quirks to get used to. Of course, if you’re skeptical, take your time and make the decision to upgrade on your own, based on your own research, experiences, and the apps you run.

It helps that Microsoft made Windows 10 available in technical preview and beta so early, and that so many people have been playing with it. All that time has given us time to tweak it, customize it, and highlight issues. Odds are any problems you run into have been solved (or at least documented) by someone else, and developers have had plenty of time to get their software ready to ship. Aside from the issues that come with any new OS, and the flurry of patches to fix them that we’ll see in the next few weeks, there should be relatively few surprises. Just, as always, make sure your data is all backed up before you take the plunge.