Your network is secure, your computer is up and running, and your printer is jam-free. Why? Because you’ve got an awesome sysadmin (or maybe a whole IT department) keeping your business up and running. So say IT loud; say IT proud …

Wait… what exactly is SysAdmin Day? Oh, it’s only the single greatest 24 hours on the planet… and pretty much the most important holiday of the year. It’s also the perfect opportunity to pay tribute to the heroic men and women who, come rain or shine, prevent disasters, keep IT secure and put out tech fires left and right. END_OF_DOCUMENT_TOKEN_TO_BE_REPLACED

Earlier this week, Facebook announced that it was going to start using all of that ever-so-illuminating app and website data it collects to serve us with more targeted ads. In other words, Facebook is getting ready to use your browsing history to benefit advertisers. Here’s how to stop them.

Of course, just because you’re getting some new (and highly necessary) controls over how Facebook shares your data doesn’t mean it’s going to stop collecting the data in the first place. So while we can at least somewhat limit how all of our salacious internet habits are being used, it doesn’t mean the cache of data itself is going away.

What’s more, the new feature is opt-out, so in order to keep your browsing history away from prying third-party eyes. You’ll need to actively head over to the Digital Advertising Alliance here and let them know you’re not willing to share.

Note: if you’re using AdBlocker Plus or anything else that disables cookies, you’re going to need to turn that off before you’ll be able to opt out.

Read the Full Article at Gizmodo.

Cloud computing has received a lot of popularity in the last few years and market observers believe it to be the future, but not if security problems persist.

For people who are not familiar with cloud computing, it is the practice that involves usage of network servers that are remotely located. Users can access the remote servers via the Internet to manage, store and process relevant data, rather than on the personal computer of a local server.

IE 6 to 11 at risk of hijacking, patch coming – but not for dead OSes like XP

Microsoft has warned of a new security flaw in all available versions of its Internet Explorer web browser for Windows PCs.

Vulnerability CVE-2014-1776, to give the problem its formal name, allows miscreants to hijack at-risk Windows computers. It’s all due to “the way Internet Explorer accesses an object in memory that has been deleted or has not been properly allocated”, the software giant explained on Saturday.

The flaw means the browser “may corrupt memory in a way that could allow an attacker to execute arbitrary code in the context of the current user within Internet Explorer”. END_OF_DOCUMENT_TOKEN_TO_BE_REPLACED

The serious Heartbleed bug that has plagued OpenSSL, the open-source encryption protocol, has system administrators scrambling to patch the back-end systems supporting many popular online services. Administrators also are revoking keys associated with the digital certificates that validate the authenticity of a website or service, according to Finnish security testing firm Codenomicon, which has set up a thorough website addressing the issue.

Users of online services need to take action as well, say security experts, as hundreds of thousands of servers, including those that support Google, Yahoo and Dropbox, may have been impacted. Many of those services are urging users to change their passwords. Here are 10 of those services.

More details can be found at http://www.crn.com/slide-shows/security/300072499/heartbleed-havoc-10-passwords-you-need-to-change-right-now.htm

As the end of Windows XP’s support gets ever closer—just over a month to go—Microsoft has shown what it’s going to do to inform users of the change.

Windows XP machines that have automatic updates enabled will be sent a pop-up message on March 8 to tell them that Windows XP will lose support on April 8. From the message, XP users will be able to visit the end-of-support website. The message will pop up on the eighth of every month unless users elect to never see it again.

If you’re not sure if you’re using Windows XP or not, Microsoft has a site that will try to tell you. There are, no doubt, ways of getting it to tell Mac users that they’re running Windows XP, too, so we anticipate plenty of sarcastic pictures on Twitter.

Over the years, Microsoft has offered various migration tools for moving files and settings from one machine to another; Windows Easy Transfer and the Files and Settings Transfer Wizard are two examples. The company is now promoting a third tool to Windows XP users in its continued efforts to get them to upgrade to Windows 8.1—later this week, Laplink’s PCmover Express for Windows XP will be downloadable from Microsoft. This isn’t actually a new promotion, though, as Laplink has offered the software for free for a few months to those moving from XP to 8.1. 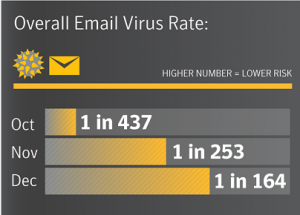 Got 164 emails in your inbox? At least 1 of them is infected. See our latest Symantec Intelligence Report here: http://bit.ly/1fhFt1U

Target disclosed on Friday that a mass information breach involved data belonging to up to 70 million individuals —a number far more extensive than originally believed.

The big box retailer said that a probe into the hacking of customers’ personal data found that stolen information—separate from payment information already reported—included names, mailing addresses, phone numbers or email addresses for tens of millions. The new figure was significantly higher than the 40 million the company initially reported. END_OF_DOCUMENT_TOKEN_TO_BE_REPLACED

Target has confirmed that encrypted debit card PIN data was stolen as part of the massive hack carried out against the retailer between late November and early December. The company previously admitted that card numbers and expiration dates were compromised in the attack that affected 40 million customers. That data has already started appearing on the black market, which in turn has put financial institutions across the US on high alert as banks look to protect customers from fraudulent activity. END_OF_DOCUMENT_TOKEN_TO_BE_REPLACED